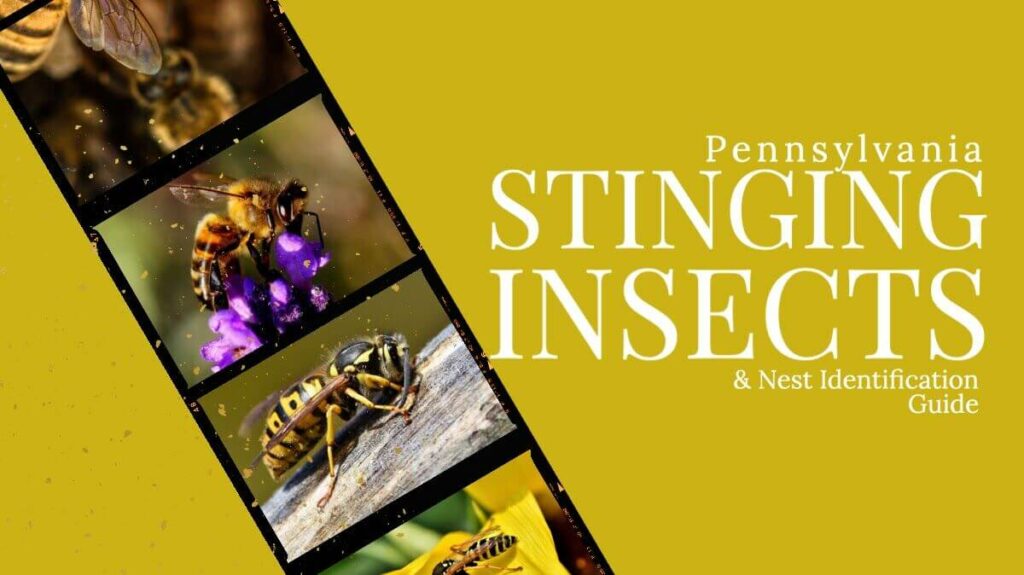 The warmer months are approaching and so is the threat of the stinging insects we encounter here in PA while enjoying the outdoors. They can potentially turn that weekend party you had planned into a scene straight out of a horror-flick. It can also be a potential health threat to guests that could be allergic and have an allergic reaction to those stinging insects’ venom.

From honey bees and bumble bees to wasps and hornets, these flying terror machines will most likely be nesting somewhere around your home during the next summer months.

Besides throwing out all those ‘buzz-kill’ vibes that might ruin your party, these insects are also a beneficial part of our ecosystem. So, proper identification is crucial for managing stinging insect populations near your home.

This article will help you identify the type of stinging insect you are encountering and what their nests look like.

What Are Stinging Insects?

A sting (or stinger) is located at the posterior end of the abdomen of stinging insects – in lesser words, their butt. Honey bees, bumble bees, wasps, hornets, yellow jackets, and certain types of ants are all members of this insect family.

The stinger is a modified, egg-laying tube that is attached to a venom sac. So, if you’ve been stung, it was a female insect that did it.

Out of all the stinging insects, yellow jacket wasps are responsible for over 70% of human stings in the United States. They are frequently mistaken for bees because of their yellow and black bodies. Most of these stinging insects have the ability to sting you several times.

The honey bee (or worker bee), which possesses a barbed stinger, is an exception. When a worker bee tries to flee after stinging someone, the stinger and connected venom sac are pulled from the insect and remain in the victim’s skin; the bee will die as a result of the encounter. How Shakespearean…

Where Do You Find Stinging Insects?

Stinging insects eat a variety of foods, including plants, wood, meat, blood, and other insects, depending on the species. The insects will usually build their nest near these food sources.

While each species may have a particular sort of nesting location, nesting sites can often be found anywhere and include the following places:

These types of insects can either chew through places like ceilings or walls to get into parts of the home. They can also bore through wood and dirt to make tunnels to enlarge their nest. 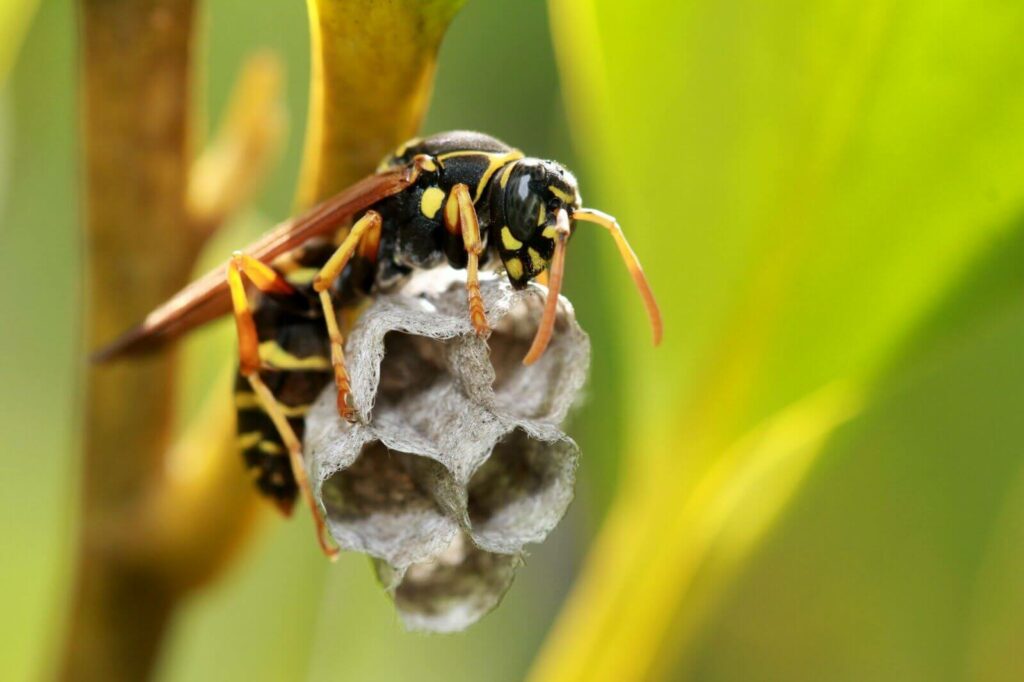 The paper-like substance that paper wasps use to create their nests gives them their familiar name. Because of the unusual design of their nests, they’re also known as “umbrella wasps.”

This species feeds on nectar, as well as other insects such as flies and caterpillars, and lives in smaller colonies. They emerge in the spring and have a body form similar to yellowjackets, but are typically brown in color.

Nests of this species are frequently seen in residential yards, hanging from trees, porch ceilings, deck floor joists, and other structures. The eggs are placed in open, exposed chambers in their umbrella-shaped nests. 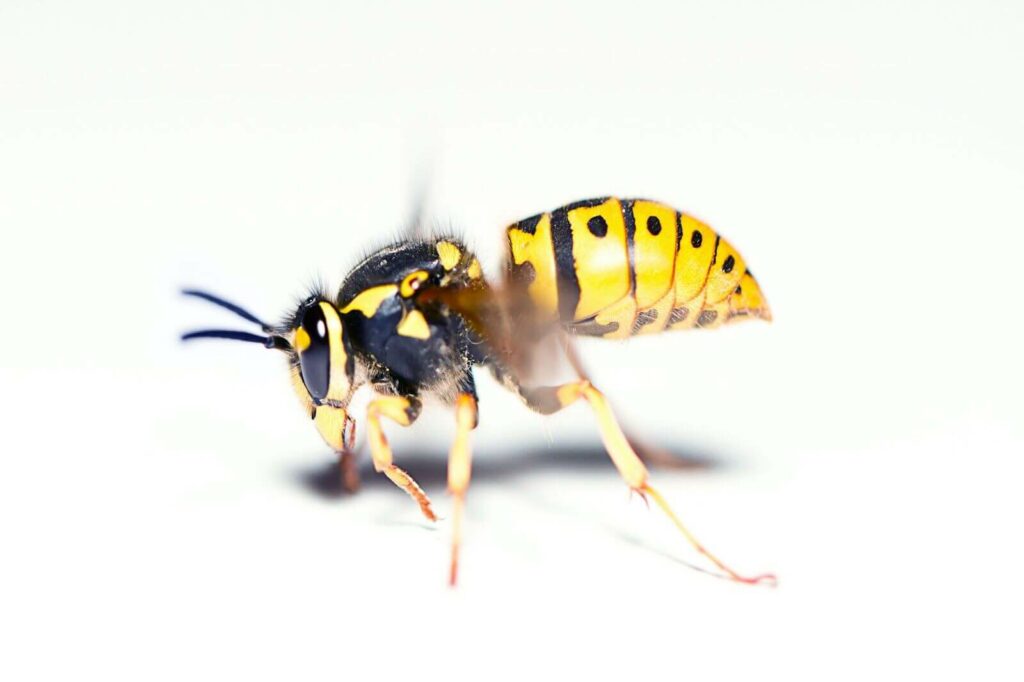 Yellowjackets come in a variety of colors and patterns, but they always have a black and yellow head and a patterned abdomen. These gregarious insects are most active in late summer and early fall, when they reside in nests or colonies that can mount up to 4,000 workers strong.

Yellowjackets are known to infiltrate outdoor activities, such as barbecues, because they dine on the sugars and proteins amongst the feast.

Yellowjackets and their nests can be found nearly anywhere people exist. Their chewed-up, cellulose-based paper carton nests may be found both above and below ground.

Above ground, nests can be built beneath eaves, under attics, or within a hole in a building wall.

A tiny, difficult-to-see entry hole is very typical of underground nests. Keep in mind that yellowjackets can fly hundreds of feet from their nest, so the bug may not always be visible when you first see it emerge from its nesting position. 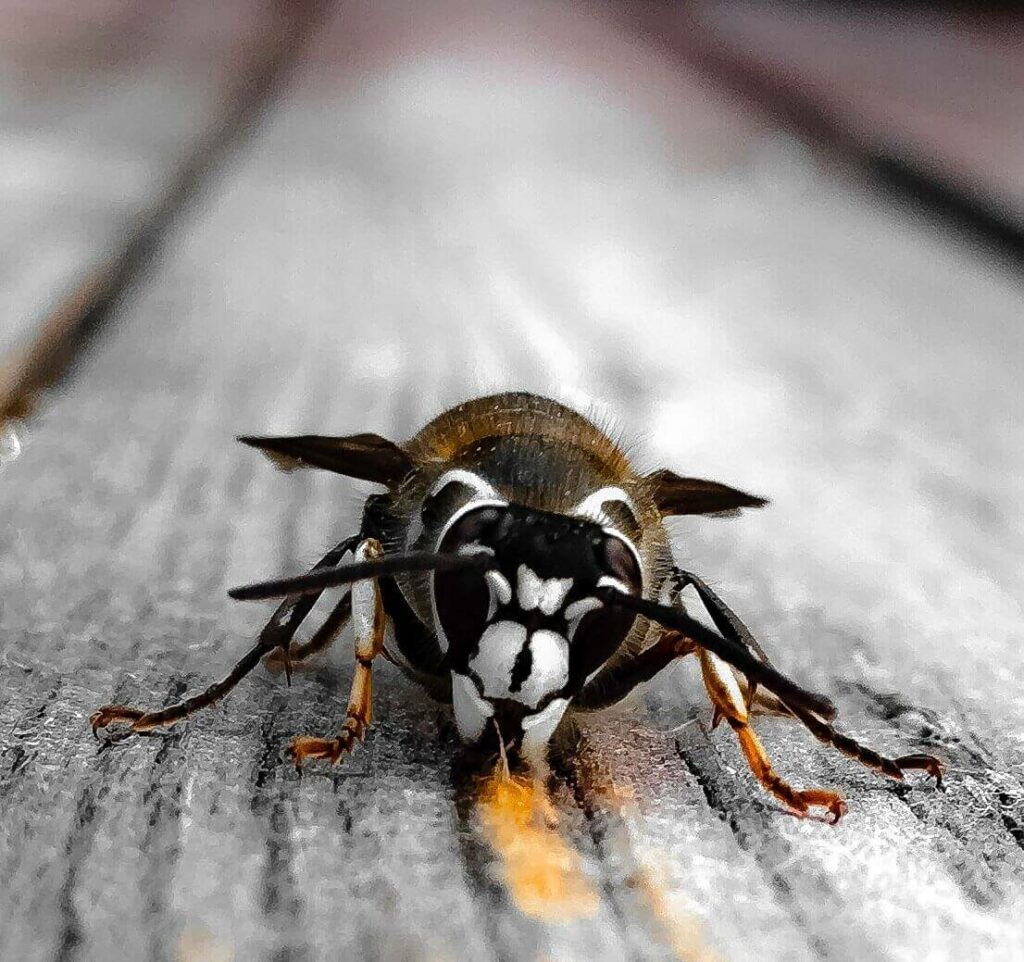 A relative of the yellow jacket, the bald-faced hornet gets its name from its predominantly black and white face. They can be highly aggressive when someone invades their space or if their nest is disturbed which presents a significant stinging hazard. They typically go for facial attacks when attacking humans. Not the face, man – not the face!

Bald-faced hornets develop paper nests that are at least three feet from the ground. Trees, bushes, overhangs, homes, and sheds are common places for them to build their nests.

Bald-faced hornet nests can reach a diameter of 14 inches and a length of more than 24 inches. Their grey aerial nests are enclosed, unlike the open cone nest form utilized by other stinging insects like yellowjackets and paper wasps. 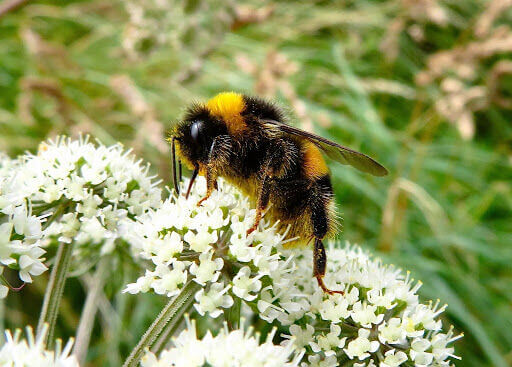 The bumble bees we are speaking of today are of the “Non-Transformer” variety. Meaning, you’re not going to have to wonder how your teenage kid suddenly got a new car way cooler than yours that so happens to be a personal ass-kicking machine from outer space. However, you might find this crew hanging out near your garage.

Seriously though, bumble bees are actually important. Bumble bees pollinate wild floral plants as well as agricultural crops. They can fly in lower light levels and cooler temperatures than most other bees, making them ideal pollinators, especially at higher elevations and latitudes.

The majority of bumble bees build their hives in holes underground previously dug by bigger animals, although others might build their nests above ground in abandoned bird nests, grass tussocks, or cavities such as hollow logs or gaps underneath rocks. They may also use compost piles or vacant birdhouses in gardens. 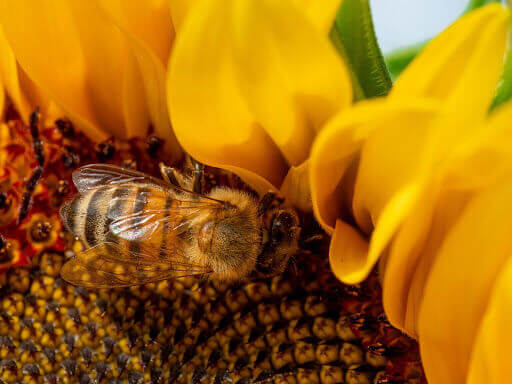 Their name says it all, I mean, who doesn’t love honey! Even in ancient times honey was considered “the food of the gods” so it’s no surprise that these guys have been valued by humans for millennia.

Their benefit doesn’t stop there. Bees pollinate a shocking 84% of all food crops that are intended for human consumption.

Sometimes, however, honey bees can become a threat when they decide to nest near people and within buildings. While their stings can be uncomfortable (and perhaps hazardous for allergy sufferers), they offer little hazard to our daily life. They only sting when they are threatened (for example, when defending their hives) or when they are squashed.

When a nest is discovered, homeowners should contact a professional pest control technician to examine the problem and remove the nest safely from the premises. Nest removal is not a do-it-yourself project when it comes to stinging insects. Attempts to remove the nest will agitate and alarm the pests, forcing them to attack in huge numbers. Contact Procor today to see how we can help!

You can also use a professional treatment program year-round for ongoing pest prevention.