They’ve roamed our planet for over 400 million years. This family of eight-legged freaks come in many shapes and sizes. They seem to thrive in nearly every environment they are put in – we are talking about spiders!

They are predators with a large arsenal of weapons. Some are skilled acrobats, others sling webs, walk on water, and even fly!

These crawling scream machines have been the inspiration to many (often hilarious) horror movies of the past and present. And although they can often make the brawniest of men jump onto a chair at times, most spiders are terrified of human contact.

While the majority of spiders are harmless, there are a handful that may be extremely harmful and even fatal if bitten. Knowing what you’re up against is the best approach to deal with an arachnid problem. The following are some of the most common spiders found in Pennsylvania.

The next few spiders we talk about can be found, pretty much, everywhere! Whether it’s in your home, your yard, or some nook or other small space they’ve conveniently found to hang out in and around the home. These next few spiders don’t typically bite and generally do not pose any threat to humans besides the occasional freak out when discovered!

The American House Spider (a comb-footed spider) is a common type known for its webs. They’re cobweb spiders and they normally build their webs in locations like closets, basements, and crawl spaces. These spiders, which are usually harmless, spin tangled webs that are mainly unattractive but pose no harm to humans.

Cellar spiders are most likely to be attracted to homes with white outdoor lights that attract insects or easily accessible entry points, such as foundation cracks and gaps around doors. These pests favor dark basements, attics, and other sheltered areas once inside and love to build their webs in these areas.

These garden spiders, which belong to the orb weavers family of spiders, are easy to spot and identify. The female yellow garden spiders, measuring 30mm in body length,  are much bigger than the males which rarely reach lengths greater than 8mm.

The abdomen of the yellow garden spider is marked with black and yellow patterns, and it is coated with silver hair. They have markings at the center of their abdomen consisting of one black stripe along with yellowish spots.

Yellow garden spiders may unintentionally go indoors since these orb weavers are widespread in lawns and gardens. They frequently tie their enormous webs to structures like door frames and window sills, which can aid in their entry inside.

Grass Spiders may be seen all throughout North America during the summer. They are members of the Funnel Web Weavers family. A Grass Spider, known for the form of its webs, spins a cave-like web in a grassy patch and hides behind it.

It possesses huge spinnerets that resemble small tails on the tip of its abdomen, which it uses to create a web that resembles little black holes amid grass blades. They like to hang around near the foundations of houses, Low-growing bushes, building cracks, and fence bottoms which is usually where you can find its funnel webs. These guys are as fast as they are shy so they are rarely known to bite humans. 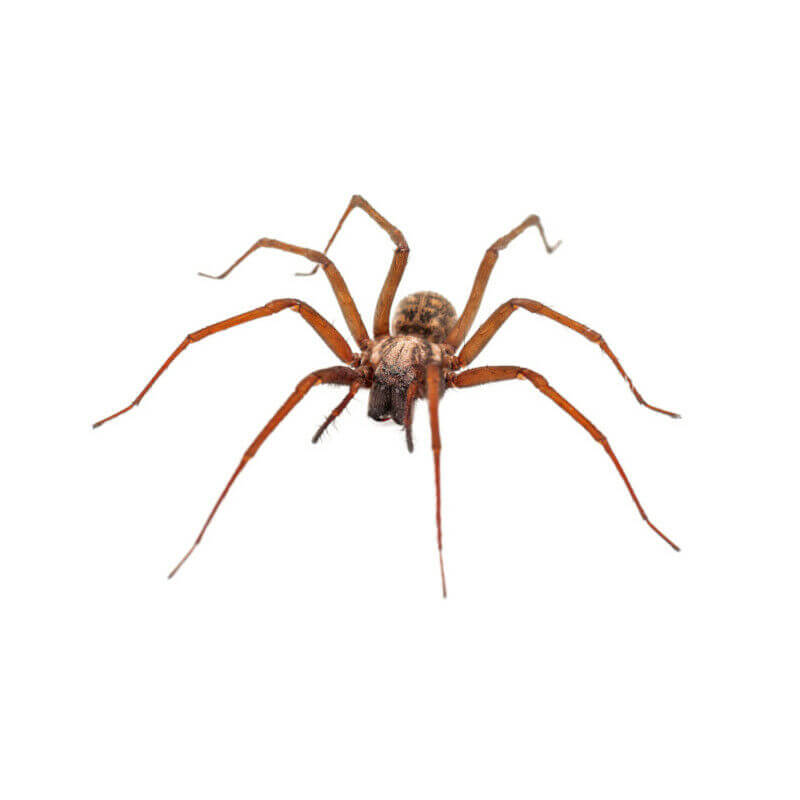 Have A Spider Infestation Problem?

Contact the Spider Control and extermination professionals at Procor Pest Control today for a no cost no obligation inspection.

Jumping spiders are members of the biggest spider family, Salticidae, which contains over 5,000 species and accounts for 13% of all spiders. There are over 300 species of jumping spiders in the United States.

This tiny jumping spider, which belongs to the Salticidae family, can leap more than four times its own body length. It may ambush insect prey that it has tracked with its rapid-fire pouncing. It also allows the spider to make a quick getaway from any potential predators.

Their abdomen and legs are usually black with a pattern of spots and stripes. In juveniles, these markings are often orange-tinted, but as the spider grows, they become white. It’s doubtful that anyone will ever get bitten by one because they’re so tough to capture. They can and will bite, although their venom isn’t poisonous and may just produce a sting.

Dimorphic Jumping Spiders are a colorful and common jumping spider species native to North America. The word dimorphic means occurring in or representing two distinct forms. They got their name from the males’ two forms or variants which is a very unusual occurrence in zoology.

Their general coloration scheme can include red, white, tan, or yellow, as well as black or beige.

As we previously mentioned, the two types of males would exhibit a wide range of colors. Females have a light brown carapace with a chevron pattern in the middle, pale legs without markings, and a black band on either side of their body with thinly veiled orange scales. They are normally found in vegetation or in trees and rarely bite humans.

Hunting spiders are usually found outside of the home, although they can sometimes be found inside. They do bite when provoked but the bite won’t be fatal to you or your pets. The bite, however, can result in extreme discomfort and sickness.

The term “wolf spider” refers to a vast group of spiders that are mostly big, dark-colored, and athletic. Unlike other spiders that catch their food in webs, wolf spiders use their muscular bodies and keen eyesight to chase down their prey.

Wolf spiders are brown, grey, black, or tan in color, with dark patterns — most often stripes — on their bodies. Their coloration serves as great camouflage, allowing them to catch food and avoid predators. Males are generally smaller than females, ranging in size from a quarter of an inch to over an inch.

The Barn Funnel Weaving Spider is a common spider species that can be found all over the world under many names such as Domestic House Spider in Europe, Common House Spider in the Pacific Northwest, Drain Spider, and Lesser European House Spider.

They are known for their speed and can travel from one area of the web to another at breakneck speed if they are assaulted or detect that their victim has been caught in the web. With striped legs and two faint black longitudinal stripes across the cephalothorax, the body color ranges from dark orange to brown, beige, or grey. The color of the abdomen is beige, gray, or brown.

The Cross Orbweaver’s white cross-like pattern on its dark brown abdomen gave it its popular name and served as a primary identifier. The Cross Orbweaver Spider is a European spider that was brought to North America and has thrived owing to comparable weather and environments.

These spiders are usually found near outdoor lighting. Cross orb weavers are not hostile and will only bite if trapped or handled unintentionally.

The eastern parson spider is named from the abdominal patterns that resemble an old-style cravat used by clergy in the 18th century. It’s mostly found in the Midwest of the United States, with findings ranging from North Carolina to southern Alberta, Canada.

Although this spider has a frightening look when it lives indoors, it is entirely safe to humans and their pets.

There are more than 43,000 different species of spider worldwide. Out of all of these varieties, less than 30 of them are responsible for human deaths. The reason there are so few deaths really comes down to the size – we’re just too big for them!

Spider venom is made to be very effective on smaller animals. As we all know, this doesn’t mean they can’t do some serious damage to humans. Some species of spiders have venom that is either Neurotoxic or Necrotic producing skin lesions on people or even producing an allergic reaction that could be fatal if not medically treated in time.

It’s important to note that “death by spider bite” is exceptionally rare, as clinics, poison control centers, and hospitals frequently have species-specific antivenin (antitoxin) on hand to treat the bite.

The red hourglass-shaped pattern on the underside of the abdomen distinguishes black widows from other spiders. They prefer dark secluded areas like corners, edges, and long grass to hide in. They may also hide in places like mailboxes or garages.

Black Widow Spiders are typically seen to be beneficial because they consume so many insects. Female black widow spiders, on the other hand, will attack people if provoked.

The Black Widow’s bite is the most toxic spider bite in the United States. The neurotoxins in the venom of the black widow spider damage the neurological system.

The Brown Recluse is a brown spider with a prominent “violin-shaped marking” on the top of its head and down its back. They like to gather in unoccupied areas of homes, outbuildings, and basements or cellars.

The brown recluse can be found across the country in a variety of climates that can range from the hot, highly humid climates like you find in Florida, arid desert regions of Arizona, and cooler temps of the midwest and parts of the Northeast like Pennsylvania. They are currently established in 15 states in the United States.

The brown recluse can cause serious harm to a person if they are bitten. Because a brown recluse bite can cause necrotizing wounds (killing the cells and tissues around it), you should seek medical treatment right away if you suspect you’ve been bitten by one.

Even if you aren’t a spider expert, you should be able to recognize broad-faced sac spiders by their distinctive coloration. Their abdomens are grey, and their heads are dark grey or brown, with orange or red legs. They feature a set of pincers in addition to their eight legs, giving them the appearance of ten legs when viewed from a distance.

They also have a large set of fangs and produce a very painful bite that can lead to secondary infections.

The woodlouse spider is a species of spider that only eats woodlice. The woodlouse hunter is known by some other common names such as sowbug hunter, sowbug killer, pillbug hunter, and Stiletto spider are the creatures in question.

Their abdomen is hazy white while the cephalothorax and legs are dark red.. Found among leaf heaps, beneath rocks, and in the ground. The bite is unpleasant and produces erythema with localized irritation.

Sac spiders have a few distinguishing characteristics that make them simple to recognize. They feature black “feet” and rather lengthy legs, with the front pair being longer than the rest.

The Long-Legged Sac Spider can be found lurking in homes or offices in places like corners, under furniture, in ceilings, and in air vents. They will bite if they feel like they are being threatened. Their bite has been described as painful with burning sensations. The bite is usually followed by itching and blistering of the bitten area.

Infestations of spiders can be dangerous to your home. Fortunately, we’ve dealt with spiders before. Learn how our extermination services can help you get rid of pests. Contact us today to schedule a free consultation and keep pests out of your house for good!